1 year ago•By Silvia Wei
Investors who own residential property in Sydney are feeling the pinch as vacancy rates rise and rents fall with no immediate relief on the horizon.

The number of vacant properties for rent in Sydney jumped 40 per cent from 15,775 last January to 22,426 this year and is expected to further climb.

Sydney recorded a higher year-on-year vacancy rate of 3.2 per cent in January, despite a seasonal drop from 3.6 per cent in December, according to SQM Research. Sydney’s asking rent prices fell 4.5 per cent over the year for houses and 2.8 per cent for units.

What is the rental vacancy rate?

The rental vacancy rate, expressed as a percentage, indicates how many places are empty and available for rent out of all the rental stock in an area.

The rental vacancy rate is an important indicator for the bargaining power of renters or landlords alike. A high or rising vacancy rate generally means tenants are in a more favourable position, whereas landlords may have the upper hand when it starts to fall. The Sydney rental vacancy rate has been trending higher. In January 2019, the rate was 2.8 per cent, up from 1.8 per cent in the previous year.

The January result is down from the previous month (3.5 per cent), because December usually sees a strong seasonal increase in the number of rental listings.

This overall upward trend is good news for tenants, because rising vacancy rates generally indicate that rents will not grow as quickly, and they may even drop.

Higher vacancy rates generally mean the number of vacant rentals is going up. Domain estimates that the total vacancies across Sydney in January 2019 were approximately 17,500. This is 6500 more than were available for rent in January 2018. 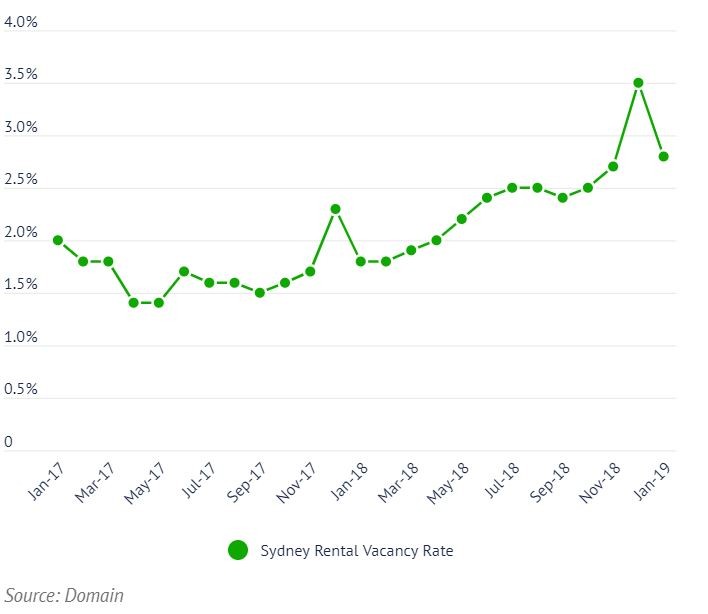